What is the prevalence of drug use among prisoners?

In the scope of a survey conducted in 2012 with regional coverage, drug use patterns of the participating prisoners (852 persons) were also examined. 49.7% of the prisoners included in the sample had used any illicit drugs/new psychoactive substance in their lives. Most of them had used cannabis (35.5%), which was followed by amphetamines (27.6%), ecstasy (26.9%), cocaine (18.7%), and LSD (12.9%). The appearance of new psychoactive substances could also be detected among prisoners; the most frequently reported new substance was mephedrone, which had been used by 12.6% of the respondents in their lives. 20.7% of the total sample reported having ever injected drugs in their lives. 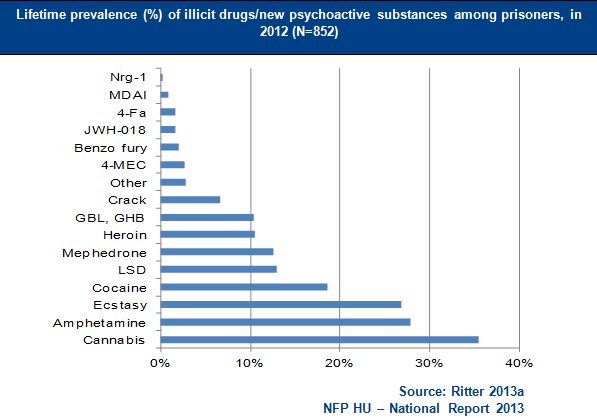 On how many occasions were substances suspected of being illicit drugs seized inside prisons?

According to data from the BVOP, during the course of 2015 materials suspected of being an illicit drug were seized on 252 occasions. Illicit substances were discovered before reaching the prisoners in 73% of the cases (185 cases). According to the reports from prisons the majority of seizures involved herbal cannabis, plant materials and tobacco most likely treated with synthetic cannabinoids and non-prescribed psychoactive medicines. Drug use inside prison was revealed in the case of 43 prisoners in 8 institutions. Most of the revealed cases could be linked to the above substances as well. The seizure of injecting equipment and injecting drug use is not characteristic in Hungarian detention facilities; there were no cases of such in 2015 either.

Are there drug prevention programs available in Hungarian prisons?

A change in legislation in 2002 made it possible to set up prevention units or departments in detention facilities for volunteering prisoners, who receive certain benefits and treatments in return for making a written declaration to agree to participate in drug tests that may take place at any time but occur at least every month.

In 2015 prevention units were operated in 20 prisons, with a total capacity to accommodate 378 prisoners. The total number of inmates accommodated at the units is fluctuating, at the end of the year it was 204 persons.

Other than the services provided by the drug prevention units drug prevention programmes open for all prisoners were realized in 28 institutions in 2015. The number of the prisoners participating in the programmes ranged from 5-6 persons to 225 persons, altogether it was approximately 1150 persons.

What is the prevalence of HIV/ HBV/ HCV among imprisoned people?

The prevalence of HIV hepatitis B and C virus infections is higher among prisoners than in the general population. Research carried out in detention facilities indicates that the majority of prisoners tested positive for HCV probably became infected by earlier injecting drug use and the related risk behaviours meanwhile another group could also be identified who probably acquired the infection by sharing needles used for tattooing.

According to the data of a national HIV/HCV prevalence study carried out in 2015 among injecting drug users, nearly every second IDU (266 persons; 48.4%) has been in prison at sometime in their lives. Among them HCV prevalence rate resulted to be 65%.

How many prisoners started treatment in 2015?

On the basis of TDI data, in 2015 a total of 95 prisoners (91 males, 4 females) started treatment because of a drug problem, all of them within the scope of a quasi-compulsory treatment (QCT) programme. The average age of those entering treatment in detention facilities was 31.1 years. With respect to their highest school qualification, 84% had elementary school qualification at the most. Examining drug use patterns, among those entering treatment inside prison, use of stimulants (mainly amphetamine) and opioids (mainly heroin) was more characteristic, while cannabis use was predominant among non-prisoners as the primary cause for treatment. Prisoners entering treatment were also more involved in injecting drug use. For 21.5% of them this was the characteristic route of administration, and 30% reported that they had injected drugs at least once in their lives. In the non-prisoner population the proportion of those injecting their primary substance and the proportion of ever injectors were 5.4% and 12% respectively. 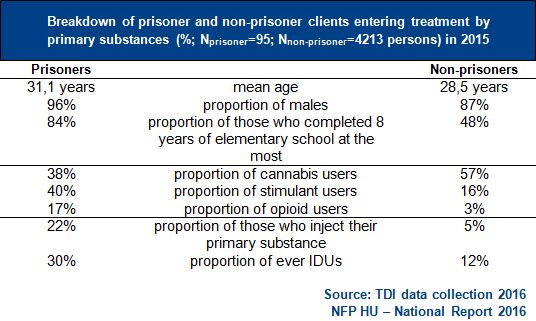 How does reintegration work in Hungarian prisons?

In 2015 reintegration/resocialization programmes or individual support aimed specifically at or held with the participation of drug user prisoners was available in about half of the 30 prisons (53%, 16 prisons). Reintegration programme targeted specifically at drug users was provided in 9 institutions (13 programmes) reaching a total number of 162 prisoners. Other more general programmes in connection with resocialisation/reintegration which also dealt with the drug problem were organised by 7 institutions with the participation of 387 prisoners. The purpose of reintegration care and follow-up care is to provide support aiding the reintegration of the prisoner into society.

Within the scope of the probation service operating in the detention facilities, the probation officers also assist with reintegration of the prisoners placed under their supervision or of those approaching them voluntarily. The reintegration care and follow-up care includes individual counselling, case management and group sessions. Among the forms of support provided in the scope of individual case management, the relevant decree separately mentions ‘the reduction of harmful consequences of addictions by dealing with the social and mental deficits linked to them’. The support covers the following areas: healthcare treatment, labour market integration, accommodation, assistance in enrolling in training, preparation for social administration, legal aid. In the scope of follow-up care the probation officers help newly released prisoners for one year through the above forms of support.