How many offences related to drugs or new psychoactive substances were committed in Hungary?

Among the drug offences registered in 2015 those committed before July 2013 fell under the force of Act IV. of 1978 on the Criminal Code (old Btk.), while Act C of 2012 on the Criminal Code (new Btk.) applied to the offences committed since. The investigation phase of a total of 6625 offences related to drugs or new psychoactive substances was closed in 2015, of these 856 cases fell under the force of the old Btk. and 5769 under the new Btk. The overall number of registered drug law offences showed a slightly increasing trend in the past 5 years; the number of registered offences in Hungary was the highest in 2015 since 2006.

Drug related offences represented 2.4% of all offences registered in Hungary. 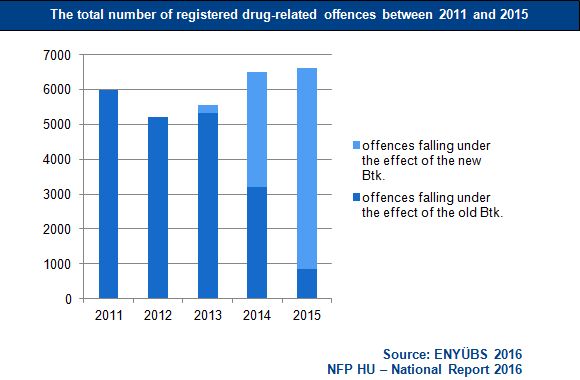 What was the breakdown of registered drug offences by drug type?

In 2015 the most prevalent new psychoactive substances were cathinone derivatives (33.6%), synthetic cannabinoids (22.5%) and phenethylamines (17.8%). 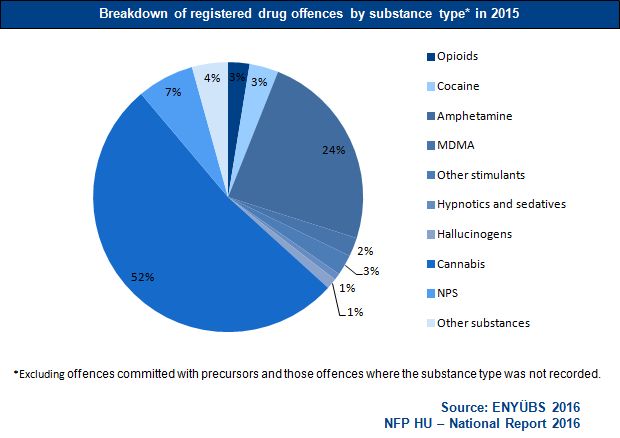 What was the breakdown of registered drug offences regarding the type of offence?

Of the offences registered in 2015, 4985 offences (75.3%) were linked strictly to possession of an illicit drug (acquisition or possession for personal use). 57.2% of these cases were committed with cannabis, 31.4% with stimulants. Other types of substances appeared as the subject of use related offences in relatively low proportions (opioids 2.6%, cocaine 3.4%, NPS 1.8%).

Perpetrations classed as supply-related offences made up 20.8% of registered drug offences (1378 cases). Slightly more than one third of supply related offences (36.4%, 501 cases) involved trafficking with a small quantity of drugs, offences committed with a substantial or particularly substantial quantity were recorded in only 151 cases (11%). Cultivation or production of drugs was the type of perpetration in 137 offences (2.1%).

Other perpetration types listed under a separate title in the Criminal Code (inciting substance abuse, aiding the production of illicit drugs) were recorded in 262 cases (4%). 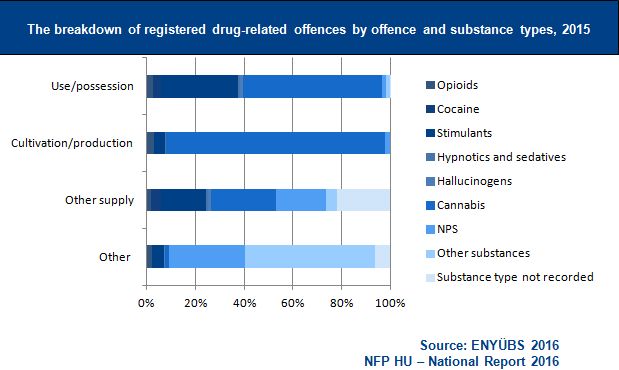 What was the breakdown of drug offenders in 2015?

Where were the registered drug offences committed?

In 2015 more than third of the drug-related offences were committed in the capital (32.7%) or in Pest county (6,2%). In order, after Budapest and Pest county, the largest number of offences was registered in Borsod-Abaúj-Zemplén, Győr-Moson-Sopron and Fejér.

As compared to the previous year the increase in the number of registered drug-related offences was 11% in Budapest and only 0.2% at a national level in 2015. 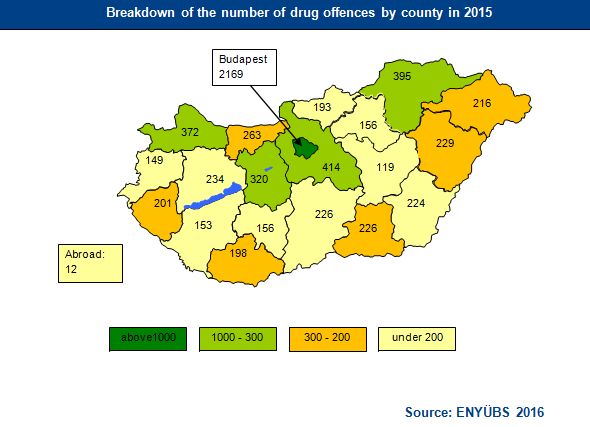 How many offenders commited an offence under the influence of illicit drugs?

What proportion of drug-related offences resulted in a formal accusation?

The large majority of criminal proceedings launched in drug related cases are closed before the court phase starts, as a result of the institution of quasi compulsory treatment (QCT), which may be undertaken as an alternative to punishment. In 2015 a total of 13439 criminal proceedings were launched in drug related cases, however, of these formal accusation was made in just 2839 cases (21.1%). The criminal proceedings were closed in relation to diversion (QCT) in 1999 cases (14.9%) but the actual number of proceedings  terminated because of QCT is higher as a smaller proportion of QCT cases will be recorded among the ‘other form of termination’ procedural decisions, under the legal title of ‘postponement of formal accusation’ or ‘other reason terminating culpability’.