What types and quantities of drugs were seized in Hungary in 2014?

According to the seizure data provided by BSZKI there was no significant change in the number of cannabis seizures in 2014, while the amount of seized herbal cannabis continued to drop compared to the previous two years. The number of cannabis resin seizures on the other hand is continuously growing. While the number of heroin seizures did not increase significantly, the amount of the material seized reached 70 kilograms in 2014, which is a significant change compared to the 5.7 kilograms seized during 2013. The number of amphetamine and MDMA seizures shows a slightly increasing tendency, however the seized amount in the case of both materials slightly dropped compared to 2013. 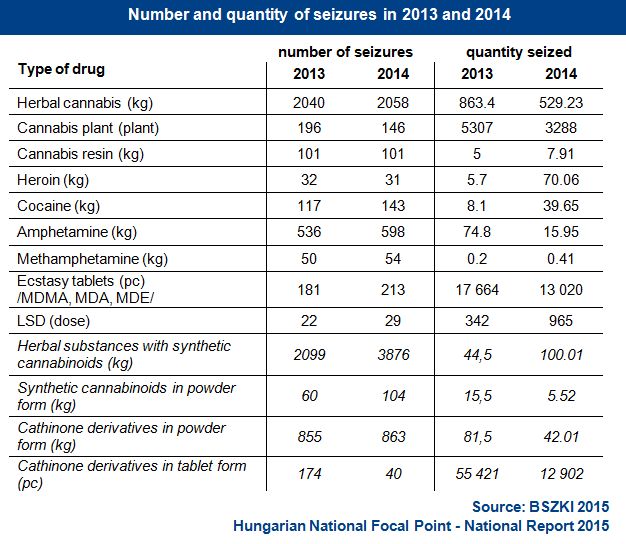 What kind of new psychoactive substances were seized in Hungary in 2014? 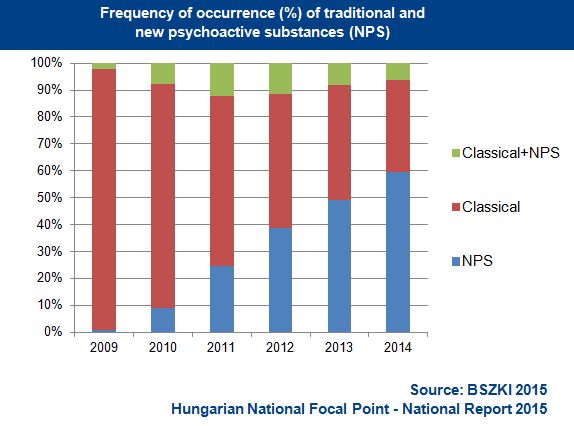 The share of two large groups of the new substances, cathinone derivatives and synthetic cannabinoids was the largest in the seizures. Cathinones are usually distributed in the form of powders. The most frequent active substances were: mephedrone in 2010, 4-MEC and MDPV in 2011, and pentedrone from 2012. During 2014 the proportion of alpha-PVP in the seizures rose significantly for a time, but by the end of the year it was pentedrone again that was the most characteristic substance. Since autumn 2010 there has been a continuous rise in the seizures of plant material impregnated with synthetic cannabinoids. The number of seizures of the products known as ‘herbal’, ’bio weed’ or ’sage’ in 2014 was nearly double the number of seizures of herbal cannabis.

What were the most common active agents in the tablets seized in the last years? 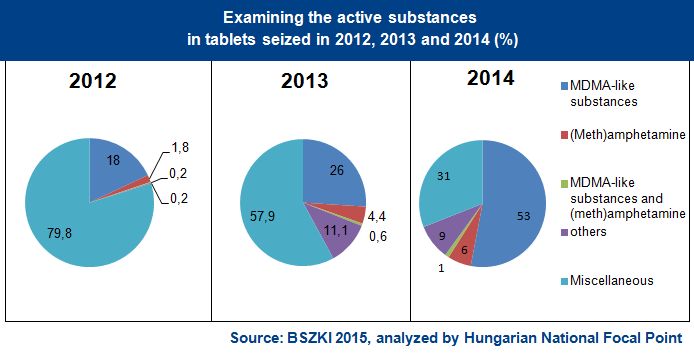 What were the active substances detected in/on equipment related to injecting drug use?

On the basis of the active substances detected in/on injecting drug use related equipment subjected to laboratory testing, it is possible to monitor trends in the types and prevalence rates of substances injected by drug users. The tendency experienced in the previous two years continued, heroin and amphetamine, which had been dominant before 2010, were each detected in just 5% of the cases. In the majority of the cases cathinone derivatives were detected on the examined items, however, among these it was not pentedrone (9.5%) that was the most frequent any more as it was in 2013, but alpha-PVP (39.9% of the cases). In 35% of the cases several active substances were present, or other active substances occurring with less frequency were identified. 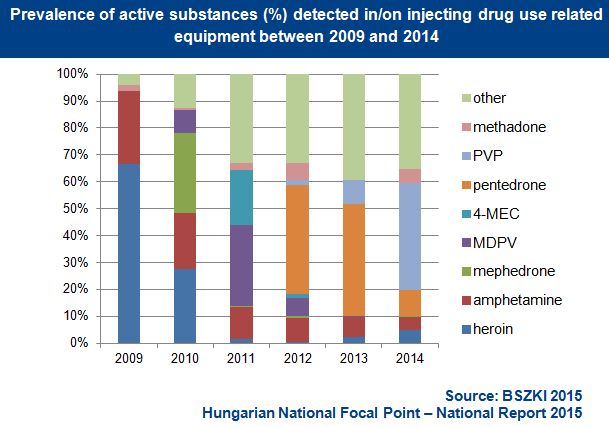 What were the mean street level prices of drugs and new psychoactive substances in 2014?

A continuous decrease in the prices of the new psychoactive substance and methamphetamine can be seen, however, the price of ecstasy tablets is increasing. The same rise can be observed in the cases of heroin and cocaine, which may be related to the change of their role on the market. 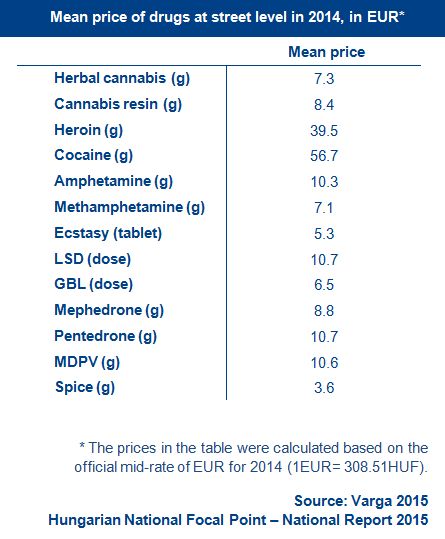 How did the active substance content of drugs change in 2014?

While there was no significant change in the case of herbal cannabis, the typically lower than 20% THC content of cannabis resin in the previous year changed and about a half of the samples analysed had a THC content of 20-40%.

Small quantities of powders containing heroin had an active substance content of 15-25%, while the heroin base content of amounts over 100 grams was characteristically in the range of 40-60%.

The active substance content of powders containing methamphetamine did not change significantly as compared to the previous year. The concentration of the seized amphetamine powders was in the range of 1-70%. A distinct change as compared to previous years was that on several occasions small amounts of amphetamine were seized that had an active substance content of around 70%, i.e. they were practically undiluted powders.