Where can we obtain information on treated drug users from?

Following European standards Treatment Demand Indicator (TDI) data collection started in 2005 in Hungary. On the basis of legal obligation all treatment units – both health and social ones – have to fill in a so-called TDI datasheet every time a new client starts drug treatment in the facility. The datasheet, which includes questions on the treatment episode, on social-demographic characteristics and patterns of use of the client, has to be filled in at the 2nd or 3rd face-to-face meeting with the drug user. Data then has to be forwarded to the National Centre for Addiction quarterly. National Centre for Addiction with the assistance of the Hungarian National Focal Point compiles, cleans and processes data annually. Clients are recorded by an individual identification code that protects their anonymity but provides the possibility to follow the clients in the data (e.g. to control annual data for reoccurring cases). Data presented below cover clients starting drug treatment in the given year therefore valid conclusions can be drawn only with the reference to this population.

How many clients entered drug treatment in 2015?

What is the proportion of clients starting treatment as an alternative to criminal procedure?

The majority of entering treatment in Hungary is linked to the legal possibility of treatment/preventive interventions that may be used as an alternative to criminal procedure. The total number of treatment entrants in a given year is affected by the changes in the legal conditions and availability of quasi-compulsory treatment (QCT), and also by the activity of law enforcement bodies. 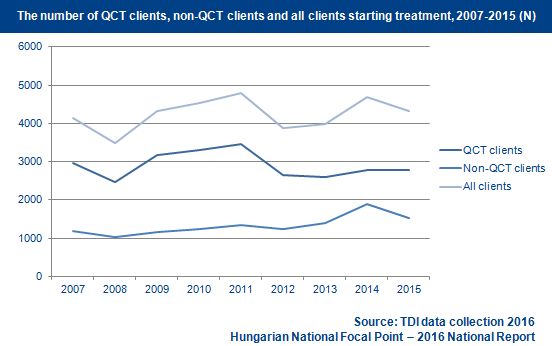 What are the most commonly reported primary substances?

The majority (56.2%) of those starting treatment due to drug problem – similarly to previous years – started a treatment programme because of cannabis use. 16.6% started treatment because of amphetamine type stimulants use, including ecstasy. 5.2% of the clients entered treatment because of the use of hallucinogens. . Opioid use was the reason for starting treatment to a less significant extent (3.6%). The proportion of cocaine and ecstasy users was around 2% each. 12.1% of treatment entrants indicated the use of ‘other’ non-categorisable substances as their primary substance. 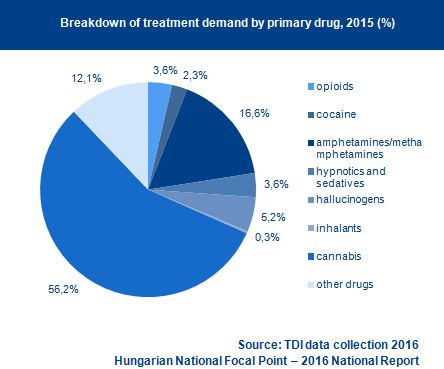 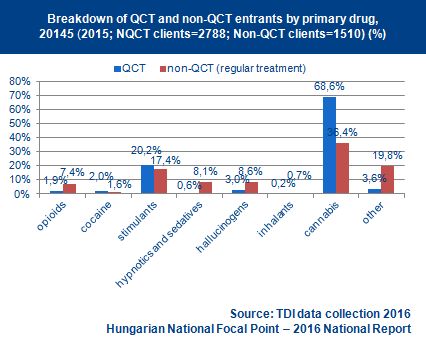 What changes could be observed among injecting drug users (IDUs) seeking treatment over the past years?

With some delay, but by 2013 the change could also be seen among those starting treatment, which had been observed earlier in the other data sources: namely the decline in the use of opioids – primarily heroin – and the increase in the use of designer stimulants among injecting drug users.

What characteristics can be observed among injecting drug users (IDUs) seeking treatment?

Among the users of new substances the proportion of the very young (under the age of 20) is higher than among the users of classical substances, and the treatment demand in the case of the use of new substances appears earlier. Those IDUs who reported having used primarily new psychoactive substances also reported using their substance on a daily basis or several times a week in a greater proportion. Among IDUs starting treatment, the highest proportion of those injecting every day or 2–6 days a week is among those injecting designer stimulants (73.9%) (other stimulants + other non categorisable substances) as compared to those injecting heroin (69.1%) and amphetamine (51.1%). 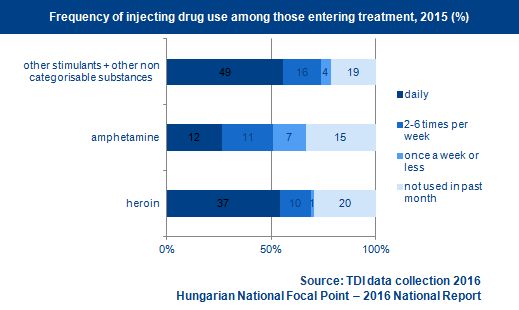 What trends can be observed among clients entering treatment?

Among both first-time treatment entrants and all clients cannabis use is the most typical problem linked to treatment demand, especially among those starting treatment as an alternative to criminal procedure (QCT). In general the majority of clients start treatment in order to avoid criminal procedure.

The other noticeable trend is the marked increase in ‘other substances’ from 2010 onwards considering the primary drug of treatment entrants. This phenomenon is obviously linked to the spreading of NPS. Among all treatment entrants, a decrease in treatment demands linked to opioids can be seen starting from 2009.

Treatment due to new psychoactive substance use may supposedly be reported under three categories in the TDI system (TDI v2.0). The category ‘other stimulants’ covers cathinones and other stimulants, ‘other hallucinogens’ covers synthetic cannabinoids, and ‘other drugs (not classified)’ may also be dominated by treatment demand for new psychoactive substance use. Even if taking methodological uncertainties into account it is noteworthy that these three categories altogether stand for about 40% of all treatment demand in 2015.

There is no significant difference in the trends by primary substance regarding all clients and clients entering treatment for the first time because of the dominance of QCT. 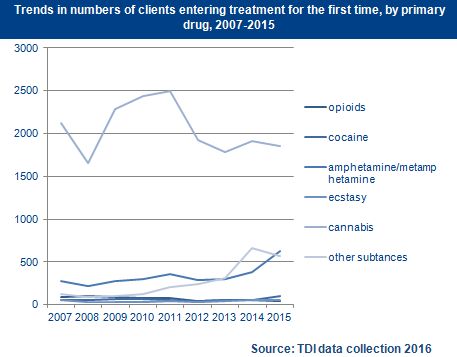 Facts and figures on substitution treatment

What kinds of opiate substitution treatment (OST) programmes are available in Hungary? 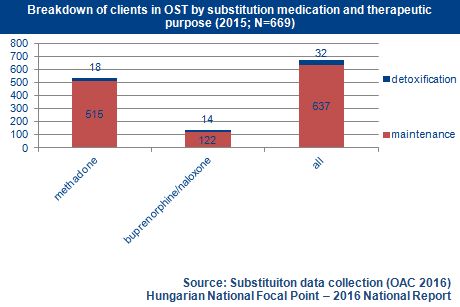 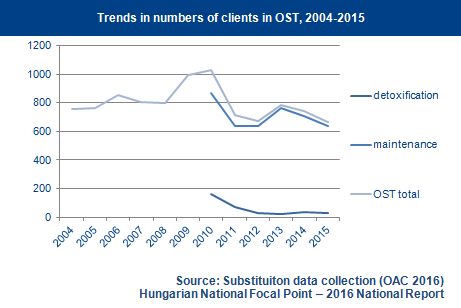