What was the market share of new psychoactive substances in past years? 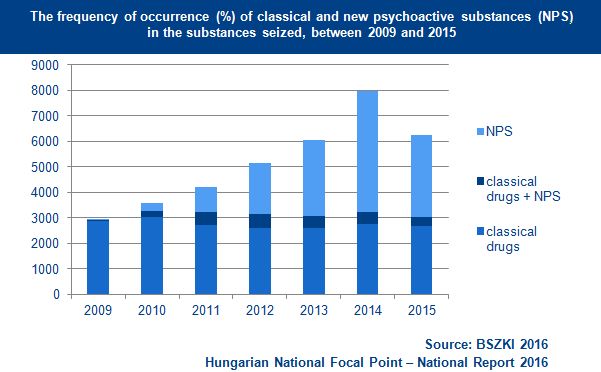 Which new psychoactive substances characterised the Hungarian drugs market in the past years?

As a result of the regulations continuously adapting to the market, the group of new synthetic substances distributed has been changing dynamically in recent years.

The share of two large groups of the new substances, cathinone derivatives and synthetic cannabinoids was the largest in the seizures. Cathinones are usually distributed in the form of powders. The most frequent active substances were: mephedrone in 2010, 4-MEC and MDPV in 2011, and pentedrone from 2012. During 2014 the proportion of alpha-PVP in the seizures rose significantly for a time, but by the end of the year it was pentedrone again that was the most characteristic substance. In 2015 besides pentedrone and alpha-PVP the substance called alpha-PHP appeared in seizures with a larger proportion typically in the period January-August. 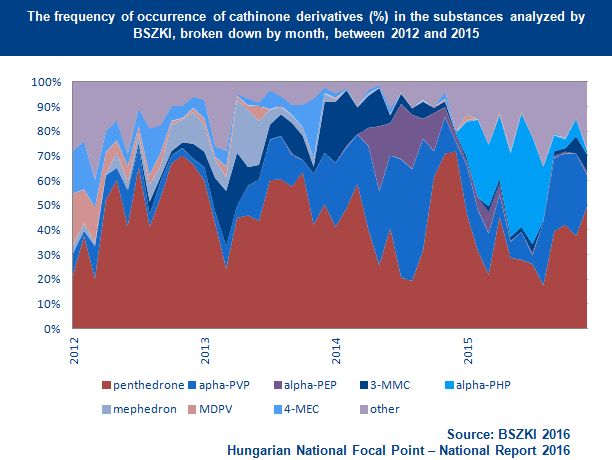 The range of active substances found in the products follow the changes in legislation dynamically, in individual periods characteristically 1–2 dominant active substances can be found on the market. After the individual active substances had become regulated, usually within 1–3 months their occurrence dropped significantly in the period 2011-2014 and their places were taken over by new active substances that were not yet regulated. In 2015 the dynamics of these processes changed, as the scope of the substances that can be traded without any criminal consequences was narrowed drastically by the expansion of the generic regulation. The place of the ADB-FUBINACA which was legal until then and dominant in seizures was overtaken by AMB-FUBINACA and 5F-AMB by the end of the year regardless that these substances have already been controlled since October 2014. 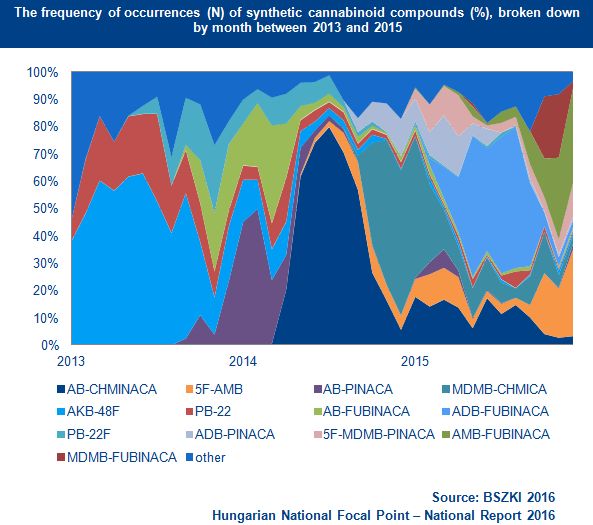 Were there any substances placed under control in Hungary in 2015?

What are the control measures relevant to new psychoactive substances in Hungary?

In Hungary a new regulation of new psychoactive substances came into effect on the 3rd of April 2012, but since 2015 the schedule listing such substances was transferred to a separate Decree (55/2014). The new regulation is based on four regulatory actions:

Act XCV of 2005 provides the legal framework (§15/B-F) for the new regulation while Government Decree 66/2012 specifies the processes and appoints the responsible bodies for reporting new substances, rapid assessment, scheduling and risk assessment. The act creates the definition of „new psychoactive substance” (Act XCV of 2005 §1/37) which is: a compound or chemical compound group that currently appeared on the market; has no therapeutic value; affects the central nervous system so it has the ability to change mental state, behaviour or perception; therefore it can pose as serious a threat to public health as the substances listed on drug schedules; and therefore the Government scheduled it in a decree. The Ministry of Human Capacities Decree 55/2014 contains the schedule for new psychoactive substances that lists individual substances and compound groups (applying the generic approach).

According to the Act XCV of 2005 and the Government Decree 66/2012 if a substance is reported in a formal notification under Council Decision 2005/387/JHA or by a national body, it has to be assessed whether it should be scheduled under Decree 55/2014. The rapid assessment has to prove that no information available at national authorities or professional institutes

The new Btk. has been extended with a section entitled “Illegal Possession of New Psychoactive Substances” (Article 184, 184/A-D), which follows the structure of the previous articles, but regulates the area with more lenient punishments. The individual cases of the new regulation are essentially the same as those relating to illicit drugs, however, it does not include perpetration with a substantial quantity as aggravating circumstance. The lenient cases relate to perpetration with a small amount, which amount with respect to the total substance is 10 grams for each substance type. The punishable acts also include possession of new psychoactive substances if the amount exceeds the small amount. 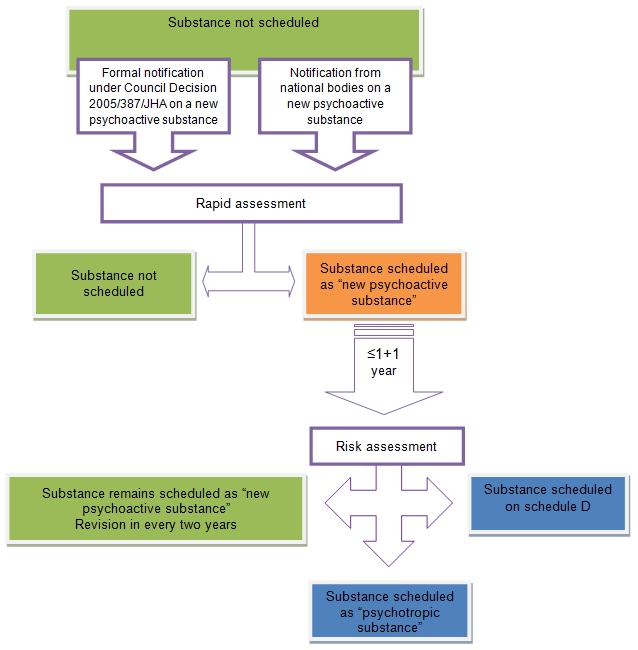