How widespread is drug use among the youth?

The sixth survey of the ESPAD series was carried out in 2015. According to its results, 26.8% of the 16-year-old pupils have already used illicit or licit drugs in their lives. Among the pupils interviewed the lifetime prevalence of all substance use was 25.9% of boys and 27.6% of girls. Almost every fifth pupil tried an illicit drug, every sixth pupil misused medicines, and every tenth pupil tried a new psychoactive substance. 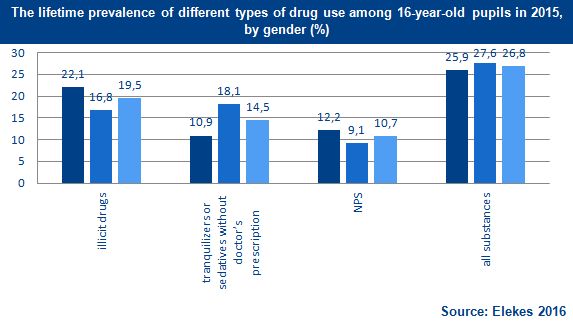 What are the most commonly used illicit drugs among the youth?

According to the ESPAD survey cannabis was the most widespread illicit drug in the school population, on the 9-10 grades. The subsequent drugs are legal or partially legal substances. New psychoactive substance is in the second place which is the synthetic cannabinoid substance group, reported for the first time in 2015. It is followed by tranquilizers or sedatives without doctor’s prescription and taking these pills together with alcohol. Painkillers in order to get high, reported for the first time in 2015, are similarly popular among school pupils. Inhalation of organic solvents is in the sixth place. The next illicit drug is amphetamine, in the seventh place. The use of ecstasy, cocaine and LSD is similarly widespread. The lifetime prevalence rate of the rest of the substances is around 2%. The use of the other group of designer drugs, the synthetic cathinones, is less widespread among secondary school students. 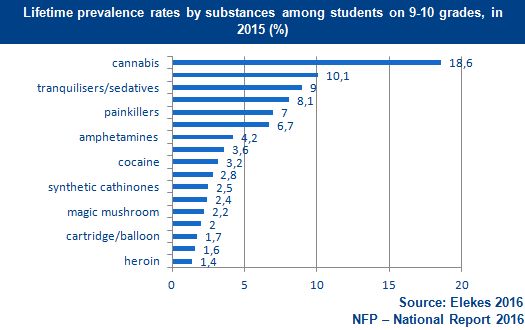 How widespread is drug use among adults?

What are the most commonly used illicit drugs among adults?

The drug preference of the young adults is equal to that of the adult population. 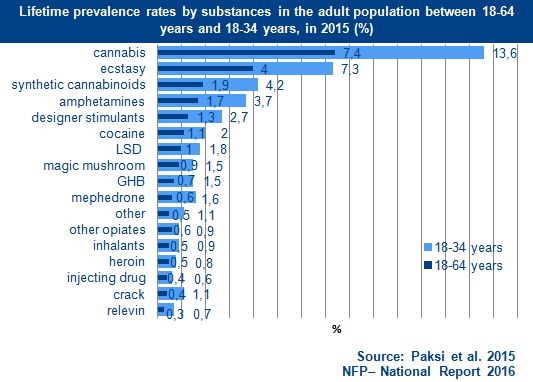 What do we know about groups where drug use is differ from the general population?

In the summer 2015 field research (Szécsi and Sik 2016) has been conducted in a district of the North Plains region, in segregated areas of three selected settlements in order to explore drug use patterns of those living in extreme poverty, examining particularly new psychoactive substance use.

The results show that the older generation smokes, drinks alcohol and takes pills without prescription. The youth prefer new psychoactive substances (synthetic cannabinoids) from a very early age. They report that synthetic cannabinoids are cheap, have faster and more intensive effect, are easy to access and presume to be licit.

In the opinion of the respondents, new psychoactive substances are primarily used by youngsters from the age of 12-13. According to their estimates more than half of the youth in that area use it. Recreational use is typical but daily use is not rare either. The reasons for their choice of substance are the classical reasons: “to forget problems, reduce loneliness, cool, against boredom”. There are no secrets around drug use. Knowledge or ignorance of drugs and addictions are rather collective. Nothing is a secret in these communities but they have no means to solve the problem.