What kind of prevention programmes are there in Hungary? 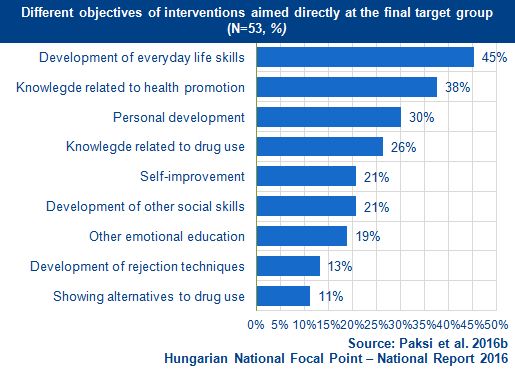 What kind of universal programmes are there in Hungary?

The KAB-ME-15 project offered grants for health promotion and health education interventions in the school setting and in collaboration with participants of the local community, in line with the National Anti-drug Strategy 2013-2020 document, with a total amount available of EUR 505,500 (1 EUR=309,69 HUF). Of the 298 grant applications submitted, 119 were awarded funding to the amount of EUR 499,107. (EMMI 2016) 20% of the winning applications implemented universal prevention programmes in school or community settings.

What kind of selective prevention programmes are there in Hungary?

Approximately one third of the winning programmes of the KAB-ME-15 project – in accordance with the stipulations of the grants – are viewed as selective prevention, which designated target groups such as those living in state care, in penal institutions, those living in socially disadvantaged neighbourhoods, as well as homeless young people and pregnant women. Almost all of the programmes realised in family settings dealt with the relatives of substance users.

As their financing is provided for 1 year in the framework of the grants, the long-term operation of the programmes is questionable.

A proportion of the party service programmes may be classed as selective prevention, the majority of them, however, deal with harm reduction, therefore their detailed description can be found in the Harms and harm reduction Workbook. 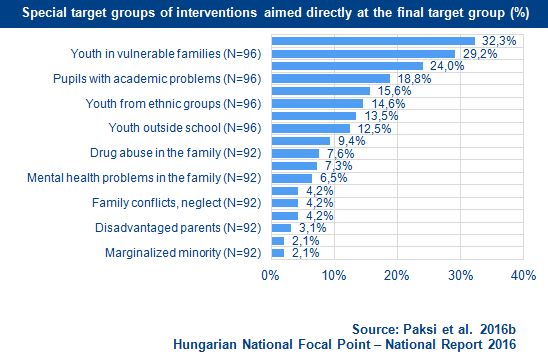 What are the most recent environmental prevention measures in Hungary?