How many problem drug users are there in Hungary?

According to EMCDDA’s definition high risk drug use is ‘recurrent drug use that is causing actual harms (negative consequences) to the person (including dependence, but also other health, psychological or social problems), or is placing the person at a high probability/risk of suffering such harms’. This conceptual framework translates into a definition, further operationalised by drug, which suggests how to measure high-risk drug use: ‘High-risk drug use is measured as the use of psychoactive substances (excluding alcohol, tobacco and caffeine) by high-risk pattern (e.g. intensively) and/or by high-risk routes of administration in the last 12 months.’

Estimates on high risk drug use in Hungary

A study was conducted in 2016 to estimate prevalence of injecting drug use in Hungary (including both opioid and stimulants injectors). During the estimation the client turnover data of years 2014 and 2015 of the national HIV/HBV/HCV seroprevalence survey series organised by the National Centre for Epidemiology since 2006 were used, applying the capture-recapture methodology recurring in time. According to the estimation, the size of the IDU population was 6707 persons in 2015. (For detailed information on methodology see the 2016 National Report.)

Even though a study was carried out to estimate the size of the high risk drug user population, broken down by the substance used, it only provides data regarding the year 2010 and 2011, therefore it is no longer appliable due to the the increasing trend in injecting of new psychoactive substances (NPS) from 2010. (For further information see the 2013 National Report.) 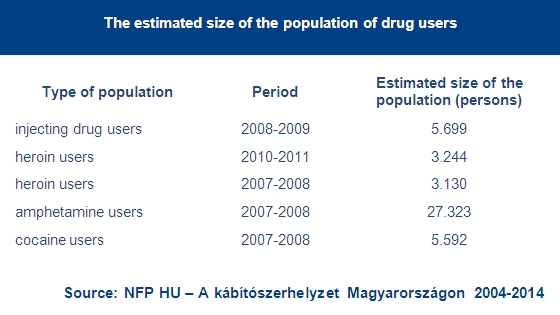 What changes could be observed in injecting drug use patterns over the past years?

On the basis of the needle and syringe program client data the increasing trend in injecting of new psychoactive substances (NPS) from 2010 has completely transformed the structure of injecting drug use patterns characteristic of previous years. While in 2009 fewer than 4% of NSP clients used designer stimulants, in 2015 this was the primarily injected substance for 80% of them. 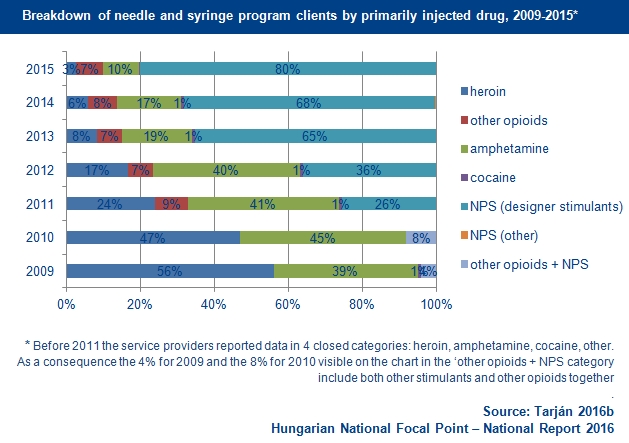